Going through life, we face many obstacles. It's how we overcome those obstacles that really matters as Newton Consultant Gleb discovered... 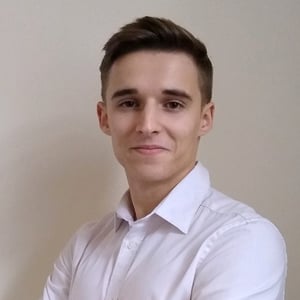 Earlier, we heard how Head Office grad Bindal Lakhani faced and overcame a significant obstacle when first joining university. Now let’s hear from Newton Consultant, Gleb Popov, who faced an unexpected challenge when completing an engineering internship with a manufacturing company during his first year.

Working from his early teens as a swim instructor, Gleb wasn’t overly concerned when starting his internship; in fact, he’d go so far as to say he was feeling pretty optimistic. Anxious to make a good first impression, Gleb went into his first day with the intention of being as friendly as possible and, in turn, getting on with as many people as possible.

"
I was of course nervous but felt I’d had previous work experience.
"

Gleb, dressed in a full shirt, tie and trousers (a little OTT for a chemical manufacturing plant), quickly came to the conclusion that he was woefully unprepared for the three months stretching ahead of him. The average age of workers was 55, there was a hostile relationship between managers and shop floor workers and quite frankly, Gleb felt as though he stuck out like a sore thumb with his perfectly polished shoes and youthful looks.

Still, eager to make a good first impression, Gleb maintained a chirpy attitude, asking questions to people he worked with, but mainly to his manager.

One afternoon, Gleb’s usually silent manager mentioned in passing that he’d been at the gym late the night before. Keen to make the most of the rare opportunity for casual conversation, Gleb politely asked why. He was sharply met by the hostile response of ‘You ask a lot of questions, are you a copper?’, seconded by approving laughter from the other workers in the room.

My confidence absolutely plummeted, I was a shell of my former self and didn’t speak to anyone.’

At first Gleb was completely rattled, being kept up at night by the hostility he’d felt from his manager and the wider team. But eventually, Gleb decided that this wasn’t the end of the world; he could do something about it. He decided to reframe this obstacle as a challenge to improve his relationship with his manager.

"
I felt this was something that had happened, I couldn’t turn back time, I wanted to resolve it and mend the relationship.
"

Although the response from his manager might have been harsh, Gleb took it as genuine feedback. He asked fewer questions and only really spoke when his manager initiated the conversation. When he noticed Gleb wasn’t speaking as much, his manager began speaking to him more.

Over the following months, Gleb came to form a very good relationship with his manager by thinking about how his actions would be received. As he learnt how to build a positive relationship, his confidence grew. By the end of his internship, Gleb knew he’d improved the situation, being taken out for fancy fish and chips and receiving Happy Birthday and Merry Christmas messages even now. The relationship shifted from one of hostility to friendship: the obstacle was overcome because Gleb worked at it rather than giving up.

Gleb still remembers this experience, reminding himself whenever he forms new relationships that first impressions aren’t always everything- you can change the way people think about you.

‘If an interaction with a person goes wrong, it’s not the end of the world.’